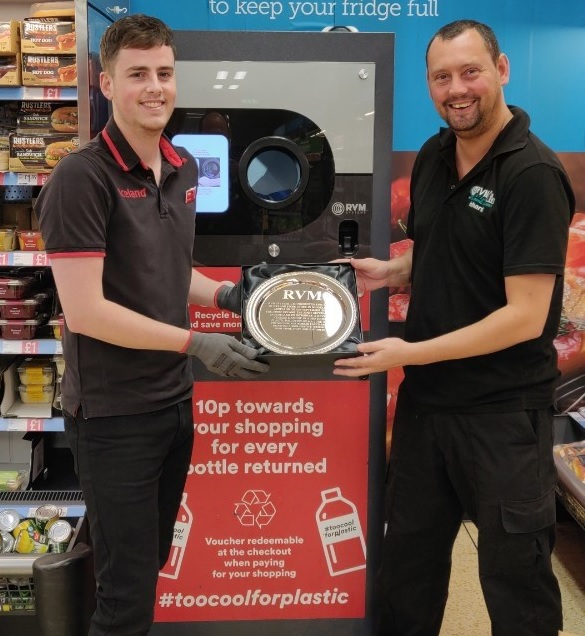 Today we presented an award to the store staff at Musselburgh Iceland Store , following a hugely successful “pilot” installation.

We surpassed all set targets for the “pilot” and by working closely with store staff we changed the behaviour of customers who embraced the technology and quickly became avid recyclers.

On the 6th of June 2018 Musselburgh’s Iceland store became the first supermarket in Scotland to introduce a reverse vending machine (RVM) in a bid to end plastic pollution.

The frozen food giant is expected to share insights gained from its RVM trial with both the UK and Scottish governments as they continue to consult on deposit return.

“While the initial trial in London (with RVM Systems) has been a success Iceland Foods feel it is important to include insights from consumers elsewhere in the UK to get a better understanding of the challenges we might face,”

RVM Systems installed the first machine in the Fulham Iceland store on the 18th May 2018. This was an industry first , as it was the first deposit return installation in a UK Supermarket. On the 6th June 2018 we installed Scotland’s first Deposit Return scheme in the Musselburgh store.

Today (12th September 2019) we removed our machine from the store and presented an award to the staff at the Musselburgh store to mark the end of our “pilot” at the store!

The Machine from Mussleburgh is being moved to a new location at an Iceleland Foods store in Scotland!

Here are some of the original press releases about the installation :

Iceland Foods Group extends plastic reduction trial to three more UK stores Iceland today announces that it will be extending its market-leading trial for the use of reverse vending machines in England, Scotland and Wales as it continues its efforts to end the scourge of plastic pollution.

Following the launch of Iceland’s industry-first trial in Fulham last month, Iceland’s fast-growing chain of larger stores, The Food Warehouse, will see its first reverse vending machine installed in Wolverhampton today. Machines will also be installed at Iceland’s Musselburgh store, near Edinburgh, this week and in Mold in North Wales later in the month.

The six month trials are designed to help the company better understand consumer perceptions and appetite for plastics recycling technology across the UK.

Iceland’s in-store trials come ahead of the expected launch of a national Deposit Return Scheme, to which the UK, Welsh and Scottish Governments have all announced their commitment in principle. The trials will help Iceland to provide Government and industry with insights that might support the creation of a national scheme.

Iceland Foods Group Managing Director, Richard Walker commented: “Today’s announcement is a further step in our commitment to tackling the issue of plastic pollution globally, following our pledge to eliminate plastic packaging from all of our own label products by the end of 2023. “While our initial trial in London has been a success we feel it is important to include insights from consumers elsewhere in the UK to get a better understanding of the challenges we might face. “At least one third of plastics, much of this relating to packaging, is single use and then discarded – plastic bottles are a prime example of this.

Through our trials, we hope to understand how to make it easier for people to act in an environmentally conscious way while tackling the threat of the millions of plastic bottles that go unrecycled every day.”

It is estimated more than 12 million tonnes of plastic enters the world’s oceans every year, putting the lives of all forms of marine life at risk, from larger animals through to plankton, and there are fears that toxins originating from plastics are then re-entering the food chain via seafood. 2 Iceland announced in November last year that it would be supporting Greenpeace’s call to the Government to adopt the Deposit Return Scheme for bottles.

The company has a long history of campaigning and leading positive change for the environment, being the first UK supermarket to remove artificial flavours and colours from its own brand food and the first UK retailer to commit to removing palm oil from own label ranges, 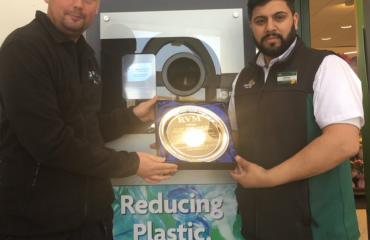 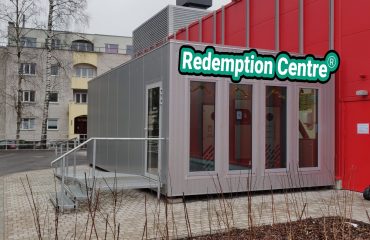 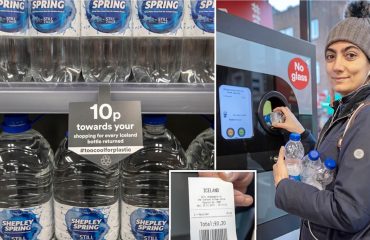 Keep up-to-date with our recent news by subscribing. We won’t spam your email, we promise.